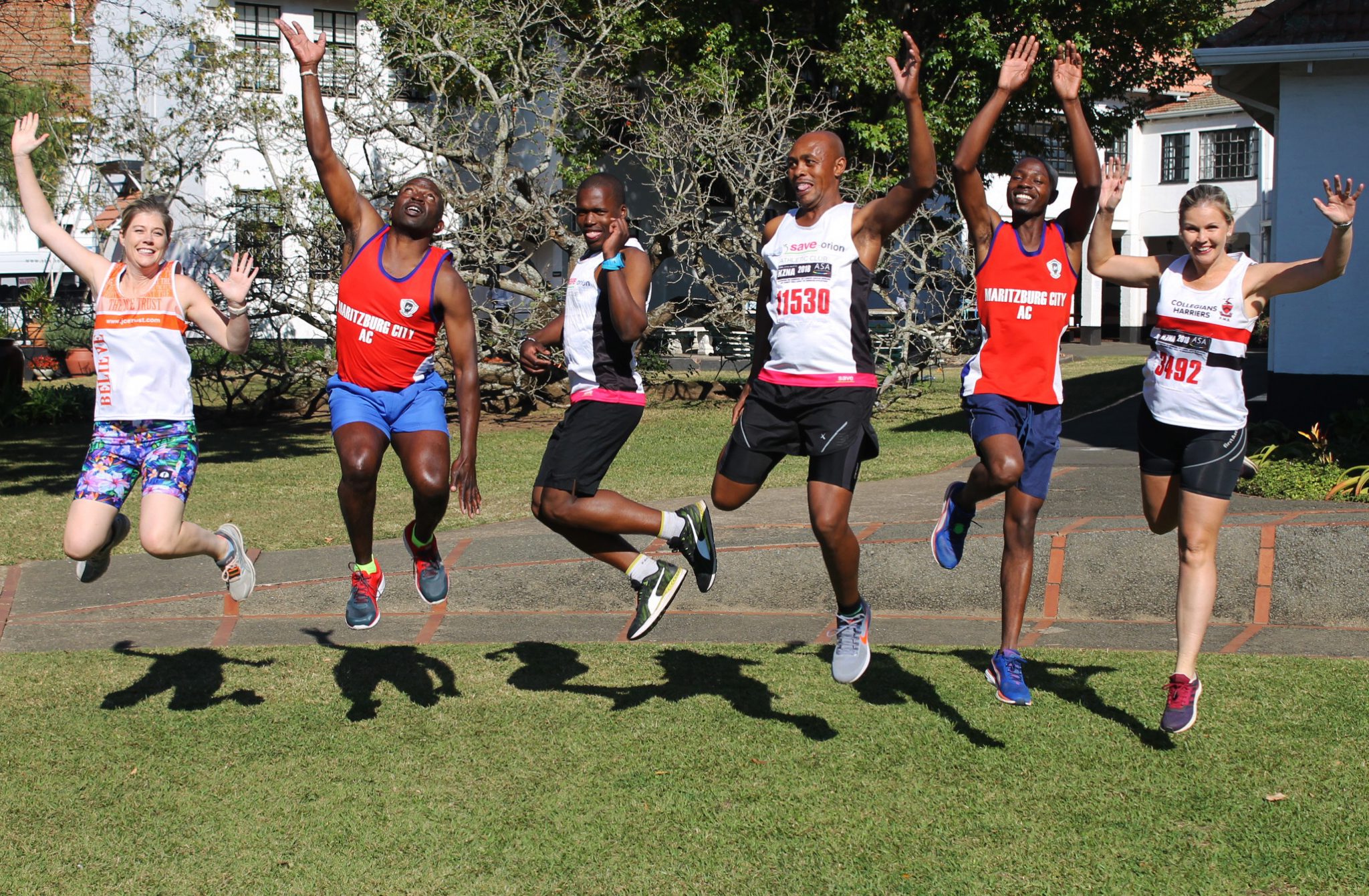 With just a few days to go until The Comrades Marathon 2018, we will once again be cheering on our 6 staff members who are running this year! They are:

She’s incredibly strong, driven and motivated. She also knows a thing or two about business, including the business of running, of course! Yes, you guessed right – Mrs Naomi Hardman a.k.a The Determinator, is one of our Comrades Marathon runners this year. Aiming for a back-to-back medal, Mrs Hardman is renowned at St John’s D.S.G. for having trained for, and completed last year’s Comrades, despite a very painful injury. This year, Mrs Hardman has, again, faced an injury, and once more, this has not dampened her determination during her training. Despite the pain, and not being a fan of early mornings or running uphill (#TownbushRoad), none of these things have stopped Mrs Hardman from training diligently for this year’s Comrades Marathon. It seems that nothing can get this woman down – except the downhills, of course!

He’s talented, he’s ambitious and he’s most certainly inspirational! Just like he does with his work at St John’s D.S.G., Mr Sanele Malunga a.k.a The Dream Chaser has poured his heart into his training for the Comrades Marathon 2018. Chasing his dream of achieving a silver medal this year, Mr Malunga will be hoping to complete his second Comrades Marathon. Having missed a silver medal by less than two minutes on his debut run in 2016, and having had to stop running on Comrades day last year due to an injury, Mr Malunga has his eye on the prize this year, and is hoping to bring home some serious bling on Sunday to add to his growing collection. It’s your time to shine, Mr Malunga – quite literally!

He’s strong… He’s dedicated … and he loves the Comrades Marathon almost as much as he loves drinking Energade! In fact, it’s no surprise that he’s chosen to drink the green energy drink this year – he is, after all, aiming for his green number! Mr Siyazi “Innocent” Ndebele a.k.a. The Green Machine is one determined man! With his time-consuming job, which includes opening up all the classrooms in the morning and locking up at night, he has had to get creative over the years with his training schedule and, as a result, he often gets up in the very early hours of the morning (2 or 3am) to run – talk about commitment! We hope that this early bird catches the worm this year and brings home that green number.

She is thought, by her daughter, to prepare for runs by sitting on the couch eating pizza and chocolate, and is known to have a good sleep-in and arrive late to training so that she doesn’t have to stretch! Despite this, Mrs Sarah Cole-Edwardes a.k.a. The Warrior Princess is most certainly a force to be reckoned with, and not to be underestimated! Described by fellow runners as “a woman with a plan” and “very strong mentally”, and voted by the Senior School girls as the “most fashionable staff member”, Mrs Cole-Edwardes not only knows how to keep running when she feels like stopping, she also knows how to look great doing so! With her lumo orange nails and her bright floral tights, Mrs Cole-Edwardes will certainly be hard not to spot this Sunday!

He’s got charisma… He’s got personality… and the only thing that’s bigger than his happy smile – which seems to be a permanent fixture on his face – is his desire to complete his second ever Comrades Marathon! Yes, it’s Mr Thumelani “Derek” Mweli, a.k.a. The Smiler, who is aiming for a back-to-back medal this year! He’s quick and agile (well, with 4 children, he has to be) and he is always willing to learn and improve both his running time and technique. As one of our fantastic security staff members, Mr Mweli always keeps an eye out for anything strange or suspicious, but this Sunday, he will have his eye on something else: the finish line – and he’s expected to get there even quicker than he did last year! One thing’s for sure, if you see a bright flash on your TV screens this Sunday, it’s not a bird or a plane, it’s Mr Mweli’s Colgate smile!

He’s either committed or he’s crazy – we aren’t sure, but the one thing we do know is that he LOVES running! In fact, last year, the day after Comrades, when most runners will admit that they can barely manage to sit on the loo, we spotted him sprinting out of St John’s D.S.G. in his training kit for yet another run! It seems that this man truly is a sucker for punishment! Having completed many ultra marathons, including a trail run that spanned over 2 and a half days, Mr Mdumiseni Zondi a.k.a. The Punisher, is a very experienced runner. Not only does he have green fingers (which is why our gardens at St John’s D.S.G. look so beautiful), he also has his green number! This year, the silver medalist, who placed 91st in the Comrades Marathon last year out of more than 17 000 runners, will be running his 13th Comrades. We will be looking out for him on TV – that’s if the cameras manage to catch him!

We will be thinking of these Comrades Marathon runners this weekend, and keeping an eye out for them! We also wish all St John’s D.S.G. parents, family or loved ones taking part in “the ultimate human race” on Sunday all the best. We are rooting for you all!