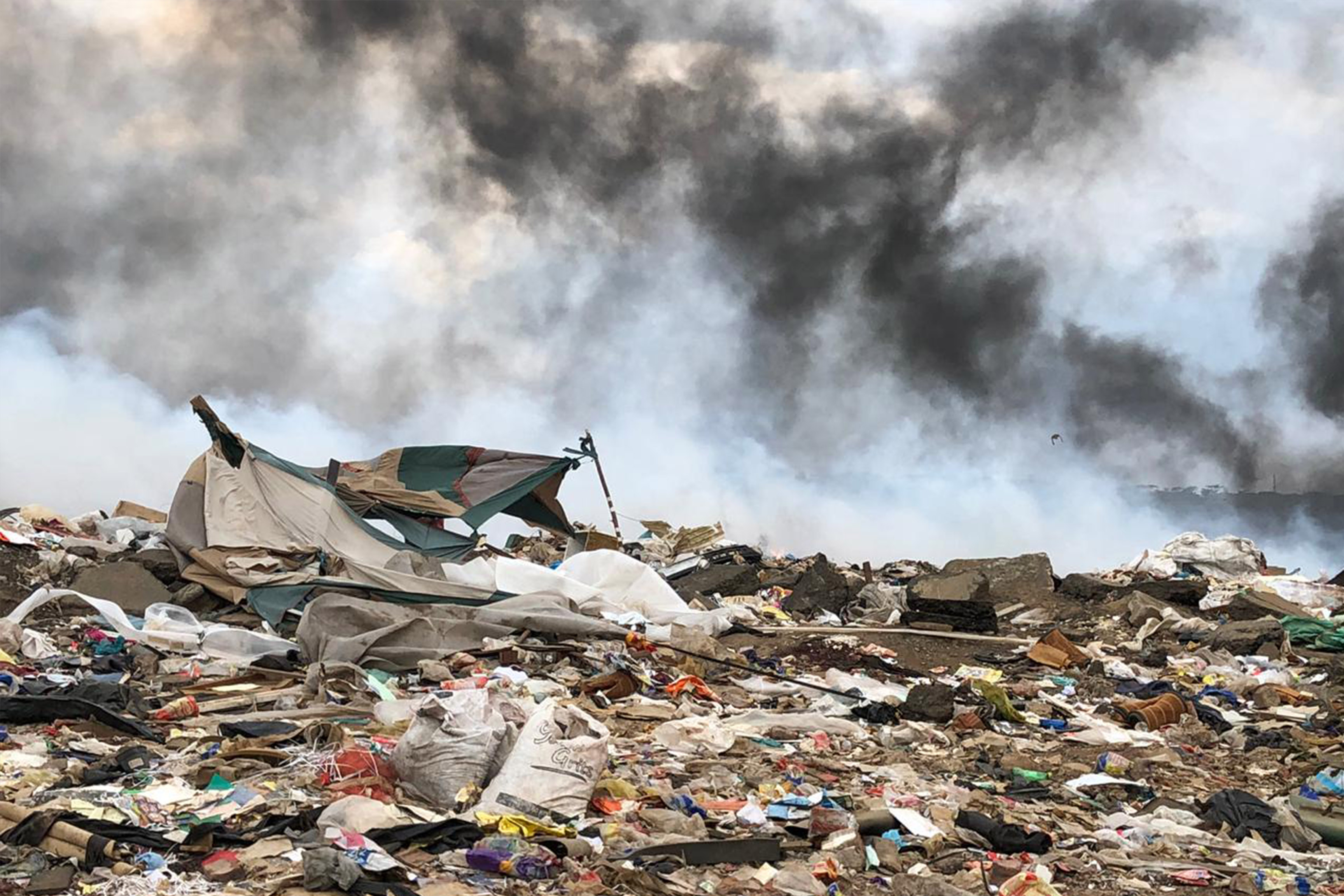 This letter is extremely important in that it relates to the latest New England Road Landfill Site (NERLS) fire, the impact it has had on our community, as well as the School’s strategy to address this crisis. The School leadership, parents and staff have, quite simply, had enough of a situation which is unacceptable, with the Municipality’s response to it having been inadequate and ineffective.

While this topic was briefly addressed in our 2020 Fees letter circulated on 7 October, few parents are aware of the steps that we have taken over the past three years to address the “Landfill Issue”. We believe the time has come for us to provide more detailed feedback regarding our position on this matter.

Although we have had, since 2016, numerous meetings with legal advisors and municipal officials to discuss the mismanagement of the NERLS, six months ago, at the prompting of our Parents’ Association, we performed a candid and introspective assessment of our interventions up until that time. The outcome was that as a School, we decided to step up our efforts to address this challenge, as it was apparent that Msunduzi Municipality was not going to address this issue without intervention from outside stakeholders. We appointed a parent, Linda Longhurst, a journalist who is well-connected in the Pietermaritzburg community, to assist in this regard. The contributions she has made to date on this project have been invaluable.

Over the past six months, we have engaged with a number of stakeholders to gather information on the state of the NERLS, including the following people and organisations:

Initially we decided to take a co-operative approach, looking for solutions from the relevant decision-makers. All the municipal officials we engaged with have, in one way or another, acknowledged that the Landfill is mismanaged and should have been closed, capped, rehabilitated and a new landfill site found at least five years ago.

Some of the issues we discovered through our research and meetings are as follows:

In our meetings with Municipal officials, it was acknowledged that mismanagement of the NERLS has led to the problems experienced now. In a number of these meetings held, placatory promises were made and assurances given that the issues would be addressed. It soon became clear, however, that the landfill has not been a municipal priority, with one official we met admitting that issues such as housing, water and sanitation take precedence over the landfill issue.

The effectiveness of such action remains to be seen. A municipality cannot be imprisoned, and any fine becomes another burden on ratepayers. If individual officials are held accountable, it is likely that they will plead that their failure to manage the landfill effectively is not wilful – they simply do not have the resources or capacity to fulfil their statutory mandate effectively. Msunduzi is a failed municipality. The problem of the NERLS is but one example of the many areas of service delivery that is in crisis. The MEC’s department (along with their sister national department) must bear some responsibility for the failure of the landfill. Dishing out compliance notices responds to only one of their statutory obligations. As the department with the statutory mandate to implement South Africa’s excellent environmental legislation, they have failed us. Had the principles for the management of our environment set out in section 2 of the National Environmental Management Act (NEMA) been put into practice by our environmental authorities, and had they discharged their duty to implement the general objectives of integrated environmental management set out in section 23, the disaster that is the New England Road “dump”, might have been averted.

Given our concerns regarding the motivation and capacity of the Municipality to manage the existing NERLS according to the waste management licence conditions, the best outcome from our perspective would be to see the current NERLS closed down and a new landfill site opened. Although a number of alternate landfill sites have been identified, information shared with us has shown that until recently, the Municipality lacks the financial and logistical resources to make this move an imminent reality.

Part of the School’s strategy in addressing the risks posed by the Landfill has been to collect quantitative data. When fires break out on the NERLS, numerous reports are circulated on social media, in particular, citing the carcinogenic compounds and toxic smoke released from the NERLS, but no-one has been able to back these claims up with air quality test findings quantifying the hazardous extent of the materials. When the landfill caught fire last year, we first engaged the services of respected environmental scientist and air quality specialist, Andrew Simpson, who deployed air-testing equipment on the School’s boundary along the N3. These test results came back largely inconclusive for the evidence of dangerous emissions and in August this year, we again repeated the tests to collect ambient air quality readings. When the fires broke out on the NERLS this week, we yet again had the air testing equipment deployed to monitor for fine particulate matter that can cause variable respiratory distress, as well as volatile gases. In so doing, we believe we are responding appropriately to the levels of risk that will be presented in the test results, the data from which will strengthen our proposed strategy set out later in this letter.

On 29 August, we escalated our approach and, through our Environmental and Planning Law Specialist Attorney, Dr Jeremy Ridl, requested from Umgungundlovu District Municipality sight of the following documents:

2. The environmental management programme for the NERLS;

3. All correspondence between the Municipalities (Msunduzi and uMgungundlovu) and the Department of Environmental Affairs pertaining to the NERLS;

4. Any directives issued by the Department against Msunduzi Municipality relating to the NERLS.

While we have received a copy of the waste management licence, we have yet to receive copies of the other documents requested from the Municipality.

The advent of the latest crisis at the NERLS has compelled us to take yet further action in an effort to compel government to address the problem, which is the poor management of the NERLS.

We believe that as St John’s D.S.G. we have an important voice and a responsibility to act. There are schools in our community who do not have resources to act and we need to act with and for them. We do not shy away from the reality that with our privilege comes responsibility. Not only do we have the duty to be concerned about the health of our pupils and staff, but we also have the voice to speak up for those who have no means nor platform to address the risks they and their communities face.

One positive outcome from this week’s Landfill fires is that public indignation has been aroused throughout the City and in this climate of awareness and desire for social and environmental justice, we believe it is opportune for us to escalate our approach yet further.

To this end, we have consulted with neighbouring schools, St Charles College and Epworth, and together, as soon as possible, we shall form a non-profit company with the aim of addressing issues of City-wide importance, including a comprehensive strategy and solution to the challenges of the existing NERLS and to act in the interests of protecting the environment. This company will be the vehicle through which schools shall take legal action to enforce our demands.

It is important to realise that this is not a St John’s D.S.G., St Charles College or Epworth problem – this is a city problem! We will be calling on all educational institutions in the City to join us as partners so that together we can effectively act on issues that affect Pietermaritzburg schools and, by implication, every family in the City. We recognise that this isn’t a short-term project but a long-term commitment which has, as its highest objective, to bring meaningful, ethical and lasting change with regards to some of the very real challenges our residents and children face.

All three schools have pledged funds to this initiative and we will be calling on any parents who feel moved or compelled to join our efforts to contribute either funds or services to assist us in reaching our goals. Information in this regard will be shared as soon as the entity is set up but in the interim we ask parents who wish to commit in any way to email our Business Manager, Naomi Hardman (nhardman@stjohnsdsg.com). We wish to emphasize that no school will be excluded because of their inability to contribute financially to this initiative. We believe many of the pupils from low-fee schools may be the most vulnerable to the effects of the NERLS, particularly schools downstream of the NERLS in Sobantu, and we wish for these schools to join their efforts with ours to seek an end to this problem.

While we support all measures to hold individual officials accountable for corruption and mismanagement, we intend to embark upon action to ensure both provincial and national government perform their statutory mandates, and that they are held accountable at the highest level. At the same time, we will work with officials who are doing their best under impossible circumstances, are committed, and are honest.

Our strategy will be, within the next two weeks, to seek to compel our Premier, and if necessary, National Government and Treasury to take political and legal responsibility for the NERLS, and to provide the financial resources to address the urgent problems faced by the City in this regard. Provincial and national governments are obliged to assist with funding, which they do according to a “financial recovery plan” prepared by the Municipal Financial Recovery Service, an entity located with the national Treasury. The responsibilities of the three spheres of government are spelt out clearly in the Constitution and the Local Government: Municipal Finance Management Act. The duty imposed on them is inescapable.

Outcomes we will seek from the provincial government, led by the Premier, will include the following:

While the legal process is underway, commencing with a formal demand, St Johns D.S.G. will continue to meet the officials currently working on the site to keep informed of developments, and to assist where necessary. In the demand made to the Premier and MECs, an invitation will be extended to them to meet and to discuss the way forward. If the response of government to the demand made of it is positive, it may be possible to find solutions that do not involve court action. Government and community stakeholders should have one common goal – the safe disposal of waste within the municipal area.

I would like to thank all parents and members of the wider community who have contacted us with their concerns, questions, or kind offers to assist in so many ways, in dealing with this most complex and concerning matter. We need to stand united in addressing any issues relating to the landfill site. I assure you that we will not waiver, and see this through until we reach a satisfactory resolution to ensure the effective managing and eventual move of the landfill site, for the benefit of our schools, and ultimately the whole city.